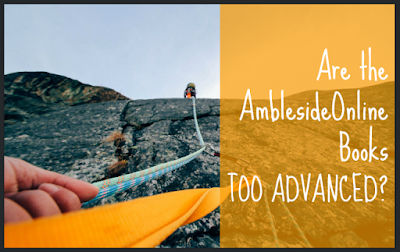 Q. What would you say to a mom who is considering homeschooling but she says the books AO uses are too advanced, too difficult for children that are assigned to read them to understand?


A.  It is true that the books are quite advanced, and seem very challenging.  On the other hand, if we go back and look at classrooms and children's bookshelves in the past, we would see that well over one hundred years ago, the books in the AmblesideOnline curriculum were commonly read, understood, and much loved by average middle-class students of the same ages. (The Lambs wrote their Shakespeare retellings in 1807 and it was an immediate hit).

Charlotte Mason used many of these same books with children whose parents were coal miners and others from the uneducated working classes, and she found them very successful. They were used in India with children for whom English was their second language, and they worked.

I would like to stop and think about why we believe today's average 7 year old cannot understand what the average 7 year old of 100 years or more ago could enjoy?   And after we have given that some thought, I would like us to further consider that insomuch as it is true that today's 7 year old cannot understand books that were the delight of 7 year old children over a hundred years ago, is this something to be satisfied with, or is it something to deplore and correct for our own children?

I recently learned that in America, public school texts, particularly the language arts and literature textbooks, were significantly simplified (dumbed down) after the Great War (WWI) and then again after WW2 - to the point that what currently passes for Advanced Placement courses for high school is equivalent to work done by average seventh graders before the mass stupification (sorry, it just makes me so mad).  (Source: The Perfect Score Project by Debbie Stier, a book primarily about helping your students do well on the SAT)- and I believe they have been revised and dumbed down again more than once since then.

So why is public school the standard?    Rather than accepting what was done to us and is being done to our children, fight back. Raise the standard. Children understood and loved these texts before. They can do it again. They are doing it again, as we have seen in hundreds and hundreds of families who are using AO, in our own children, and in a few CM-inspired small cottage schools we hear of here and there, some of which use our curriculum. These books were well within these same target ages appropriate in the 1800s and the 1900s, and (barring significant issues which would be obvious exceptions) there is no reason they cannot be read, understood, and much beloved by school aged children today.

Naturally, we are not all starting at the same point.  For some of us it takes some more work, some more effort, and some more sacrifices (namely, do give up electronic screen time if you are having trouble, and don't skip the glorious outdoor play and romps), but it is *so* worth it.

That's what I wish I could say to such mothers - with earnest pleading, and a reminder that every one of the Advisory put this together for such a mom as you, and we and our fabulous Auxiliary team and dozens and dozens of other devoted volunteers reaching across the table and grabbing every young mother's hands and promising to help as much as we can on our fb page, on the forum, and via our website.
Posted by Wendi C. at 11:17 PM 2 comments: