A New Look at "This Country of Ours" 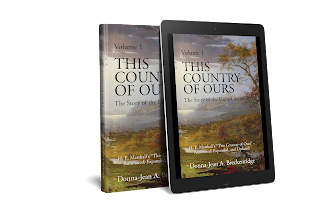 On AmblesideOnline's website, we say that "This Country of Ours is a classic work for which we have found no equal, and it is an important spine in the AO curriculum." We stand by that statement, and we recommend the book for the very end of Year 2, and for all of Years 3, 4, and 5.

H. E. Marshall's book was published in the United States in 1917, and it therefore has certain terms and expressions that are no longer in usage today. Over the years, I've wanted to update the book, and to add some notes and helps that would enhance the reading for a new generation.
That project is part-way done. I have completed Volume 1, which is chapters 1-28, in an "Annotated, Expanded, and Updated" version. Here are a few of the things that are added or adjusted in this version:
-the sources of Marshall's many quotes are listed, as accurately as possible.
-outdated or color-based terms for Native people are removed and replaced with the correct tribal name wherever possible.
-terms that are now considered offensive are changed (such as the term for a Native woman).
-new information that is pertinent is added (such as links to Viking discoveries, or how the Spotswood Peace Treaty continues to this day).
-there is a Pronunciation Guide for names of people or tribes, and there are now definitions of some words that are not easily understood in the context.
-in some places, a few sentences or paragraphs that explain more of the story are included, where it's helpful.
-there is enhanced punctuation, to make read-aloud easier.
-American spellings are used, rather than British spellings.
All notes are at the end of each chapter, so as not to disrupt the reading. (One additional change: the title of chapter 17 has been changed to "A Year to be Remembered, and the Peace of Pocahontas Ends.")
In the process of this project, I have been impressed once again by Marshall's passion for the truth, by her fairness, and by her gift of writing. The story of America is compelling, and she has done a worthy job of telling it. This version seeks to follow in her footsteps.
This version is now available in paperback, hardcover, and in an inexpensive Kindle version. Volume 2 will be available in a few months, with the third volume completed in a similar time period. Volume 4 will be original material, taking the story beyond 1917, for term 1 of year 6.
Charlotte Mason wrote, "It is never too late to mend but we may not delay to offer such a liberal and generous diet of History to every child in the country as to give weight to his decisions, consideration to his actions and stability to his conduct; that stability, the lack of which has plunged us into many a stormy sea of unrest." ("Towards a Philosophy of Education," p. 179)
In this stormy sea of unrest, here is a new look at "This Country of Ours."
Please know that anyone can still use the original version of TCOO, and the free version online! But if you want the updated version, it is available on Amazon.
Posted by Donna-Jean Breckenridge at 10:10 AM No comments: