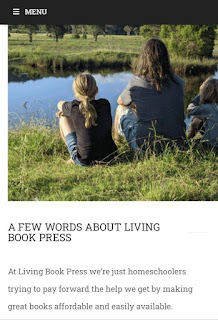 In its nearly 20 years of existence, AmblesideOnline has never charged for its online curriculum or forum. Our entire offering has been and will always be free.

We have been able to pay for our work through  Amazon's Affiliate program, but we now have an opportunity to provide an additional way to support AO.

Living Book Press publishes a number of books that are in AmblesideOnline's curriculum. LBP has several titles for which they've sought and gained reprint rights, and some that have never before been transcribed and republished. This is already a wonderful contribution to the Charlotte Mason community in general, and the AmblesideOnline family in particular.
One of our objectives at AmblesideOnline is that of using the best possible books that are also readily available. On our site, we include links to free online sources where they exist. We suggest that our families buy used books for their home or group's library, and we also link to inexpensive Kindle e-books.
As we list books for each year, we have provided links to Amazon. When you purchase a book through that link, AO receives a small percentage, as an Amazon Affiliate. This has helped us sustain the work of AO over the years, a work which we offer completely for free.
In the light of recent concerns and as assurance regarding those concerns, and also because we are grateful for the work of Living Book Press, we have entered into an additional affiliate program - this time with LBP. On our website, you will see this symbol:  £,  which is a direct link to purchase that title through LBP. When you buy the book that way, AO will also receive a small percentage to help us with the ongoing work of AmblesideOnline.
We will continue to link to both Amazon and Living Book Press (where applicable), in order to provide our AmblesideOnline family with as many options as we can.
Posted by Donna-Jean Breckenridge at 12:37 PM 12 comments:

Charlotte’s primary-level students narrated a little at a time, to fully develop their powers of attention and their skill in telling back.

“[Attention] is the power of bending such powers as one has to the work in hand; it is a key to success within the reach of every one, but the skill to turn it comes of training.” (Formation of Character, p. 95)

They used the same stories for “telling back” as they did for other subjects, from mythology, fairy tales, The Pilgrim’s Progress, and the Bible; and they told about “how we know the world is round and a great deal besides; for all their work lends itself to oral composition and the power of such composition is innate in children and is not the result of instruction” (Philosophy, p. 191). Does that contradict what Charlotte said in Formation of Character? No, it is the attention, or the listening ear, that must be trained; but the power to tell (aside from a few basic instructions in what is expected) is a natural one.

The junior grades “wrote their little essays themselves.” “Little” seems to refer only to length, because oh my, the reading list... “We could do anything with books like those,” said an unnamed headmaster. Charlotte scolded him for missing the point, but I think he was at least half right: the ability to narrate well, and to turn that skill into written composition, does begin with the choice of books. Some writers can start from a point inside their heads, without any outside reference, but for most of us, that’s as hard as being handed a brush and told to paint, without having anything to look at. “Compose something,” my piano teacher once commanded, when I was about ten. But since I knew very little about listening to music, much less about creating it, the result was worthless, a waste of time. I knew my way around the piano keyboard, but I had no musical ideas, nothing to write music about; I did not understand even how to begin with the “major lines,” much less work out the details. And she never asked me to do that again. Why, similarly, do teachers ask children to shape composition bricks, but refuse to give them the right mud for the task, never mind straw?

"For right thinking is by no means a matter of self-expression. Right thought flows upon the stimulus of an idea, and ideas are stored as we have seen in books and pictures and the lives of men and nations; these instruct the conscience and stimulate the will, and man or child ‘chooses.’" (Philosophy, p. 130)

Excerpted from Ideas Freely Sown: The Matter and Method of Charlotte Mason, by Anne E. White

Posted by Anne White at 7:34 AM No comments: