Below are several free audio files of books used in Year 0 of AO.In addition to links to free audio sources for material for the youngest children, I have included links to related topics as well. Sometimes that link may be as simple as a coloring page or a recipe of something tasty to make that seems to go well with the story.  Other times I've linked to resources for the parent. Those resources are some I believe will help the parent develop a meaningful philosophy of education, elevate the approach to education from rules to principles, and help deepen the reader's understanding of certain valuable principles (CM's methods, for instance).

AO, after all,  is a (free) program which seeks to develop and emulate a Charlotte Mason education.
Read here to learn more about what defines a CM education. Here are some of the books listed for year 0 of AO in free audio format: 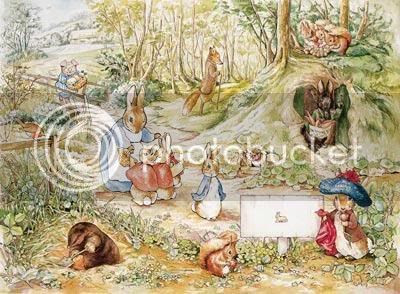 ~Audio links to works by Beatrix Potter
~The Velveteen Rabbit by Margery Williams.

~The Story of Little Babaji by Helen Bannerman. This is a retelling of an older tale and the new version is not in the public domain.  The original version is  Little Black Sambo, and it is on Librivox.   The story is essentially the same in either version, and it is a very charming story.  However, in the original, Black Sambo's parents are Black Jumbo and Black Mumbo, and the illustrations were truly embarrassing caricatures.  I wouldn't have it in my house (you can look it up on youtube to see samples or look at it here if you must).
~Poetry:
A Child's Garden of Verses by Robert Louis Stevenson.

Illustrations here, from a vintage edition.
The Real Mother Goose by Anonymous. Poems Every Child Should Know edited by Mary E. Burt. Mother Goose with illustrations and the option of audio, including several different languages to choose from.

...it is well to store a child's memory with a good deal of poetry, learnt without labour.  [a friend of hers raising a niece hit upon an excellent method] She read a poem through to E.; then the next day, while the little girl was making a doll's frock, perhaps, she read it again; once again the next day, while E.'s hair was being brushed. She got in about six or more readings, according to the length of the poem, at odd and unexpected times, and in the end E. could say the poem which she had not learned.
I have tried the plan often since, and found it effectual. The child must not try to recollect or to say the verse over to himself, but, as far as may be, present an open mind to receive an impression of interest. Half a dozen repetitions should give children possession of such poems as 'Dolly and Dick,' 'Do you ask what the birds say?' Little lamb, who made thee?' and the like. The gains of such a method of learning are, that the edge of the child's enjoyment is not taken off by weariful verse by verse repetitions, and, also, that the habit of making mental images is unconsciously formed...
But, let me again say, every effort of the kind, however unconscious, means wear and tear of brain substance. Let the child lie fallow till he is six, and then, in this matter of memorising, as in others, attempt only a little, and let the poems the child learns be simple and within the range of his own thought and imagination. At the same time, when there is so much noble poetry within a child's compass, the pity of it, that he should be allowed to learn twaddle! (CMason, vol 1)

"...let them have tales of the imagination, scenes laid in other lands and other times, heroic adventures, hairbreadth escapes, delicious fairy tales in which they are never roughly pulled up by the impossible––even where all is impossible, and they know it, and yet believe.
Imagination and Great Conceptions.––And this, not for the children's amusement merely: it is not impossible that posterity may write us down a generation blest with little imagination, and, by so far, the less capable of great conceptions and heroic efforts, for it is only as we have it in us to let a person or a cause fill the whole stage of the mind, to the exclusion of self occupation, that we are capable of large hearted action on behalf of that person or cause..." Volume 1, page 152,3


Various Fairy tale and folk tale collections by Joseph Jacobs.
Childhood’s Favorites and Fairy Stories by Various. Includes Mother Goose Rhymes and fairy tales.
The Three Bears- audio with lovely illustrations as well, as well as the option to listen in several different languages.
The Three Little Pigs (same as above, pretty illustrations, audio available, and several languages).
In The Nursery of My Bookhouse by Olive Beaupre Miller. Various folk and fairy tales for the youngest set.

If you are uncomfortable reading these stories to your children because you believe they are racist, consider this opposing view as the stories as subversive, pro-black, anti-slave-owner tales of resistance.

Many recordings of Aesop's Fables. Baby’s Own Aesop by Walter Crane.


Additional books our family likes that are not on AO:
The Goops and How to Be One; funny poems about the Goops, who have no manners. A fun way to teach manners to your children so they won't be goops. Johnny Crow's Garden-


Caveat: There are a few books listed above that are on AO's booklist for year 0, but there are two things you need to know.

2. AO is far more than a booklist. It is based on principles which are found in Miss Mason's six volumes, in the Parents' Review magazines Miss Mason edited, in articles - all found on AO's website, fleshed out in discussions held on AO's forums, which are free. Other homeschooling moms there share schedules, narration questions, links to resources they've found, advice on what worked and didn't work with their children, and more. There are even study rooms where moms are reading and discussing Miss Mason's principles, her books, and other books- and there are lots of discussions about the books in the curriculum.

Charlotte Mason herself addressed the erroneous idea that all there is to her programme is a booklist in the sixth volume of her series:


The easy tolerance which holds smilingly that everything is as good as everything else, that one educational doctrine is as good as another, that, in fact, a mixture of all such doctrines gives pretty safe results,––this sort of complacent attitude produces lukewarm effort and disappointing progress. I feel strongly that to attempt to work this method without a firm adherence to the few principles laid down would be not only idle but disastrous. "Oh, we could do anything with books like those," said a master; he tried the books and failed conspicuously because he ignored the principles.

AO is more than a booklist- and there is a lot more to AO than the booklist.  If you're not participating in our forums, then you're missing an incredible amount of support, wisdom, and encouragement.
Posted by Wendi C. at 3:48 AM