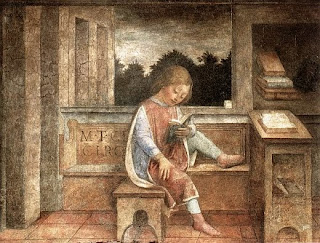 Well, no (and I'm sure he would have had a scroll, not a book), but he does seem to be enjoying it anyway.

After a lot of procrastinating, I got busy this summer and wrote North-based notes for Cicero, Demosthenes, and Coriolanus.  I have always been a bit hesitant to tackle North, mainly because of the amount of vocabulary footnotes that seem to be necessary in Shakespeare, and they're the same era.  But if you figure that Dryden was 1631-1700, that really doesn't make him a whole lot later!  In other words, if you want a new translation, get a really new one, but it doesn't make sense to tremble over North's just because of the age thing.

Actually what's more of a problem is just finding the North's versions of the different Lives.  I came up with online sources for the three above, but I'm also revising some earlier notes for Alcibiades, and for that I ended up having to type the story out myself from my Wordsworth's Classics copy.  (You can applaud now.  Chocolate is nice too.)

Out of the three, I think I liked doing Cicero best.  I liked the story of him having to make a big court decision, but not even being able to go home and think about it, because his house had temporarily been taken over by women doing some kind of religious festivities.  I could just imagine him trying to come in the front door and having a bunch of women's club members dropping flower wreaths on him, playing music, probably had had a bit of wine...it had to have been a fun evening, right?  He probably fled in terror.

And at that point, the peaceful old days in the library would have sounded pretty good.