cont. from this post.
"Has she used them to establish those deep life long bonds of love and sympathy and mutual help and understanding, which should year by year take the place of mere physical or animal affection- or has she, to use the stinging words of Mrs. Lyn-Linton "allowed motherhood to end, where it ought to begin, at the birth of the child, and trusted other women to do for money, what she would not do for love."  Those are bitter words, and like most satirical sayings they are only half-

true.  It may sometimes by laziness, or love of pleasure, that makes the modern mother hand over her children to the care of others, but it is also true that the more conscientious a woman is the more clearly she will see her own deficiencies, and dread the consequence of her possible ignorance or negligence. She may feel most strongly all that a mother ought to be, to her children, and she may most earnestly desire to do all that she can for them, but if she is perpetually being told that there are others more competent than herself to perform each individual duty in the end, she is apt to believe it.  If this is true in health, it is even more insisted upon in illness. Through most of our childish complaints, our mothers nurses us, but the habit of calling in a hospital nurse, the moment there is any serious illness in a household, grows every year.  It may be a wise practise, I am not here prepared to defend or to oppose it, but it certainly does take from mothers almost their last definite opportunity of tender intimacy and personal devotion.  The more dearly a woman loves her children the more earnestly she desires to give the best of everything, but is it not a possible contingency in the present day, that a child who has had the most excellent nurse, and perfect kindergarten and ideal school may yet, by them, be robbed of the best of all- that complete and tender union with his own mother, which only very close personal contact in his early years can assure.   The habit of turning direct to the mother for help and sympathy and counsel is one that very few will undervalue, but it is a habit that must have taken deep root in early years if it is to withstand the strong natural reticence of English nature in later life. 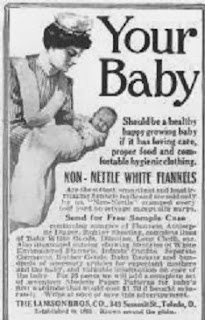 "Love grows by what it feeds on," But if a mother has neither fed, tended, taught, nor nursed her children she has lost much of the natural food of love, and there seems so little room for her in the children's lives that the tie between them may easily dwindle to a mere sentimental one which will be of little practical value in later years, and she may come to feel, with some bitterness, that the very unselfish tenderness, which should have been expended in personal devotion to her little ones, has been used as a motive power to persuade her to stand aside and let others take her place.

This demand "to stand aside" for the good of the child is being made not only on the mothers in our own rank [I believe the upper middle classes and above, WLC], but of late the same process is strongly urged for the children of the poor; it is not long since the Westminster Gazette published a series of very eloquent appeals called the "Cry of the Children."  These letters pressed for the wholesale removal of slum children to the country, where they might grow up amid healthy surroundings, with foster mothers in cottage homes.  Now, green fields, and fresh air, and birds, and flowers, and country food are all good and excellent things, but I venture to think they are not for one single moment to be weighted against a mother's love, and when we talk of "taking the children back to nature" the last lesson we should learn from her would be to part the little ones from those who gave them birth.  The heritage of a poor child in a great city is but a dark and pitiful one, but I think those who know it best would be the first to acknowledge, that often its one glory is the beautiful and unselfish devotion of the poor mother.

It is perhaps the one great compensation for the children of the poor, that they alone may fully know how much their mothers loved them.  The rich mother may do much for her children, but she is not called upon to go hungry that they may be fed, nor cold that they may be warm, nor to work sixteen hours out of the twenty-four, in order to keep the home together, and through the cold and hunger, and unceasing toil are evil things, the love and heroism that they give rise to may be more beautiful and more valuable to the children's hearts, than all the sweet sounds and sights of country life." 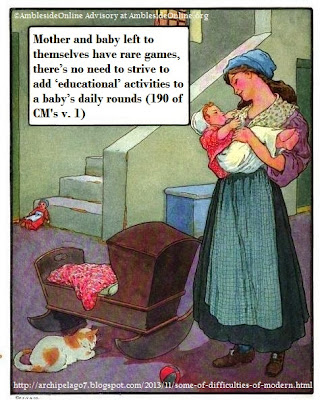 From volume 19 of The Parents' Review
Illustrations are taken from a woman's magazine of the same time period
Posted by Wendi C. at 6:43 PM