Some of the Difficulties of Modern Motherhood: A New Parents' Review Article

This article is from volume 19 of the Parent's Reviews, and it is not yet online at the website.  More about that below.

Some of the Difficulties of Modern Motherhood (part 1)

There has never been a time when the duties and privileges of motherhood have been more constantly insisted upon than at the present day: every writer, who considers the up-bringing of children, lays a full burden of responsibility on the shoulders of the mother, and while the pastors and masters are more than willing to claim credit for all the successes, among the young folk, it is noticeable, that the failures are almost invariably credited to the mother's account.  She is held responsible for her children's health- for their manners, for their morals, and even for their intellectual achievements in after life. Well and good- like most women- I should be much averse to belittling the influence of my sex; but I confess it does seem strange to me that the very generation that is doing its best- or its worst- to take from mothers all their best opportunities of influencing their children's lives should be the age which has decided to talk most loudly of a mother's influence.  There can, I think, be little doubt that all the tendencies of modern life are towards separation rather than union between mother and child.

Let us begin at the very beginning- when first a woman looks down at the face of her new-born baby, it is with a veritable pride of possession, surely this is her own, as nothing else on earth can ever be. But from the first, she will find all the forces of civilisation leagued together to rob her of her supremacy. Probably the first question will arise concerning the feeding of the baby; it is astonishing, to any one who has glanced at the statistics of infant mortality, to note how light-heartedly doctor and nurse will advise the bringing-up of a child by hand [my note; bottle feeding]. It is sufficient for any little difficulty to arise (and there are unfortunately, few mothers, in these days, who can nurse their babies, with complete physical ease) and a "bottle for the baby" is suggested as cheerfully as though by the use of artificial food all the dangers of infant life were not seriously increased, and one of motherhood's dearest privileges at once surrendered. For the bringing up of a baby by hand not only diminishes the child's first best chance of a healthy life, but also makes it fatally easy to violate that wise law of nature, which decrees that a baby in its first year of life shall never long be absent from his mother's arms.

Next comes the question of a nurse for the child: and on all sides the counsel is practically unanimous to engage a throughly [sic] trained woman. "You would never forgive yourself, if you had not done so, and anything went wrong with your baby." This is an unanswerable argument to a young mother, but the highly trained nurse is an autocrat, who brooks little interference within her nursery, and the more competent she is the more completely will she govern every detail of the baby-life. Many mothers with a "treasure of a nurse," would, if the truth were known, have to please guilty to some secret awe of nurse's wishes, and have often been conscious of being somewhat "on sufferance" in the nursery, whereas surely they ought to be the very centre and mainspring of life in that domain. Then comes the next step. In the last generation it was not unusual for the mother to undertake the early instruction of her children, it was the pride of many busy mothers in the Victorian Era that they had taught all their numerous children to read and write, but this is an age of specialisation, and according to the specialiasts, it is little short of criminal for an unqualified person to attempt the instruction of a child, and I have heard it emphatically stated at an educational meeting, that the last person to teach a child should be its own mother.

So the little one passes from the trained nurse to the trained teacher, and soon- cruelly soon, the claims of the perfect organisation for child-life in the modern boarding-school will begin to be urged. There are so many drawbacks to the bringing-up of children at home, especially in the suburbs- the difficulty of finding a good school within reach, social complications, and perhaps above all, the impossibility of completely compassing that most important item in young life, healthy out-door freedom in play-time, in conjunction with reasonable supervision. No wonder that the mothers, who have visited the charming preparatory schools of the present day, with all their perfect arrangements for work and play, feel that it is impossible to do better for their youngsters than dispatch them to one of them as early as may be. And yet with the beginning of boarding school life, for boys at any rate, a real home life has ceased to exist. They have become rather, visitors, dear and welcome guests for their holidays, and instruction and correction are both a little shirked to avoid spoiling their good time. Many of them, we know, will never be real inmates of the home again. In any case, with the beginning of the boarding-school, the first great chapter of the mother's influence ends.

The question that the modern mother must ask herself is what has she done with those early opportunities?  (to be cont.) 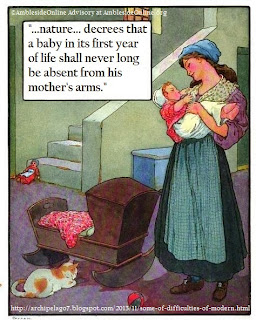 Isn't that bit about the baby in its mother's arms lovely?  And don't the comments about specialization seem just as apt today as they must have been in 1908?  And aren't the comments on boarding schools too sad for words? It will be interesting to see what the author recommends for mothers to do to make the most of those 'early opportunities.'

Our source for this article: Previously, I shared how the Advisory obtained the Parent's Review volumes which our volunteers have typed for Leslie to put on the website.

Shortly after that blog-post, our volunteers finished typing up the last of the 9 volumes that were in the Advisory's possession.  Providentially, we believe, at that same time one of our AO users shared that another volume was available for sale in England at a charity website.  It was shockingly underpriced (I think about ten pounds), so I scurried over there and bought it.  (I really love the internet, don't you?)  It's volume 19, published in 1908.    You can see the table of contents listed here on our website.

We'll be posting more photographed pages to share for volunteers to type as soon as I can coerce, er, I mean, cajole and convince, my 17 year old to photograph it for us. Her 23 year old sister did the photographing of volume 2 for us and she does physically still live at home, however, she is currently absorbed in college work and wedding plans.  The 17 year old is lobbying for a reduced school schedule in exchange for photography work.

In the meantime, I thought I'd share an article that I enjoyed here on the Advisory Blog. I'll be posting it in installments.  I hope you enjoy it as much as I!
Posted by Wendi C. at 12:47 AM