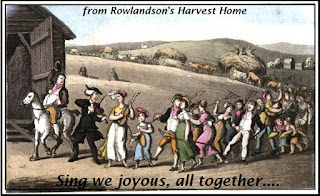 Some people were and are skeptical about it, but usually, when they give it a try, they find their children really enjoy it, and often the parents do, too.  Folk songs speak to children in a unique way, and they give children the opportunity to participate in this traditional art form by singing the songs themselves.

Four things you should know about folk music:
1.  Folk music is fun to sing.

2.  There is no one right version. Folk music is created by something called the Folk Process- that is, somebody, somewhere, created a song, perhaps set to music an actual story he knew or just made one up to tell, much the same way somebody started telling the story of The Three Bears, and these things get passed down, and things change over time, and in different locations. You'll find variations all over the place. That's okay.

3.  Some folk music is earthy and bawdy.  Some is macabre and sad.  You don't have to sing those lyrics. (However, I personally think the macabre and sad ones are some of the most enjoyable to sing).

The Bold Grenadier (English, originally, but pretty much every colonial country has a version they claim to own)
On the Road to Gundagai (Australian, distinctly)
Home on the Range (American)

Jeanne has a playlist for you here.  It's for the full year.

I have one for you here- it's currently just for this first term, but I will probably add more later.  I like multiple versions of the same song when I'm learning it and planning to sing it for school, and my playlist reflects that.

If you search Youtube, you will probably find playlists from other AO families as well.

Some of the songs on those playlists do have lyrics, but we also like to provide lyrics to our members when we can.  Here's what we've come up with.

Here's one version of the lyrics to the Bold Grenadier (also known as One Morning in May or The Brave Volunteer) :


As I was a-walking one morning in May
I spied a young couple a-making of hay.
Oh, one was a fair maid, and her beauty shone clear,
And the other was a soldier, a bold grenadier.

They had not been there but an hour or two,
When out of his knapsack a fiddle he drew
And the tune that he played made the valleys to ring.
"Hark! Hark!" cried the lady, "hear the nigntingales sing."

Kind soldier, kind soldier, will you marry me?
Oh no, my sweet lady that never can be,
I've a good wife at home, in my own country,
Two wives and the army's too many for me.

As I was a walking one morning in May,
I spied a young couple a-making of hay.
Oh, one was a fair maid and her beauty shone clear;
And the other was a soldier a bold grenadier.

Some refer to the brave volunteer rather than the bold grenadier. Both are soldiers, According to Wikipedia, the grenadiers were first established in the 17th century. Chosen from the largest and strongest soldiers, their primary function was throwing grenades. Over time the grenadiers retained their elite status, but were no longer strictly associated with grenade throwing.

The second folksong for term 1 of this school year is the Australian On the Road to Gungadai- the lyrics are here.

The third folk song for this first term of the 2015/16 school year is Home on the Range. I think it's kind of interesting that this song and Gundagai express similar sentiments- a nostalgic longing and love for home. There are a lot of lyrics to this one, as with most folk songs. Here are just a few:

A HOME ON THE RANGE

OH give me a home where the buffalo roam,
Where the deer and the antelope play,
Where seldom is heard a discouraging word,
And the skies are not cloudy all day

Home,  home on the range!
Where the deer and the antelope play.
Where seldom is heard a discouraging word,
And the skies are not cloudy all day

Where the air is so pure, the zephyrs so free,
The breezes so balmy and light
That I would not exchange my home on the range
For all of the cities so bright

How often at night, when the heavens are bright
With the light from the glittering stars ,
Have I stood here amazed and asked as I gazed,
If their glory exceeds that of ours.

Happy singing to you!